The Modular Read-Out Controller for CBM 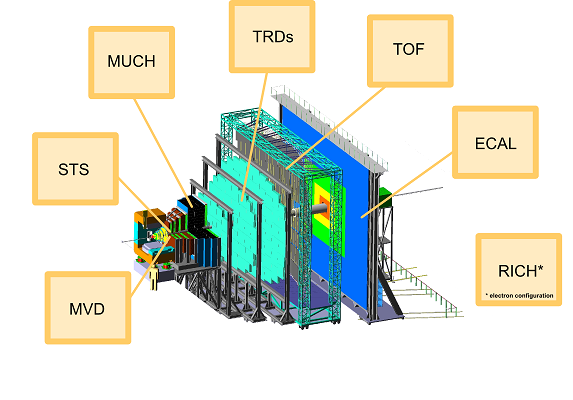 One scenario is the final detecor setup. In this scenario many ROCs will be operated in parallel, a very high data throughput is required, the assembled ROCs need to be operated in an environment where they might be exposed to radiation, and the different ROCs need to be electrically isolated because the different detectors might be operated with different ground potentials. The implementation of a firmware respecting all these requirements is a complex and very time consuming task. The other scenario are laboratory setups for detector tests during the research and development phase of CBM. Here all the previously mentioned requirements are far more relaxed. The problem is that these firmwares need to be available as soon as possible so the detector developers can readout some data to analyze their setups. This requires the implementation of different transport logics, a first rather simple but early available firmware, and a second complex firmware which needs to be available after the research and development phase.

All together, this led to the idea of a modular ROC design, which separates the FPGA firmware into a readout logic module and a transport logic module. The functionality of the transport logic can be re-used for all detectors, only the interface to the frontend electronics needs to be exchanged. Once the transport module for the final detector setup is finished it becomes available for all detectors with minimal effort.

In addition, this modular approach allows an efficient development of the firmwares by more than one designer. The frontend modules and the transport modules can be developed separately by different developers.

Of course the modules have to share a common interface. The interface is separated in three different classes, a OPB (On-chip Peripheral Bus) like interface for the slow control, a FIFO interface for data transport and a deterministic latency interface for synchronization using so called DLM messages. The interface is designed to respect the special requirements of the self-triggered and time-stamped concept of the CBM experiment.

The modules that are supposed to be used in the final experiment (and only those) need to be designed tolerant against Single Event Effects because of the exposition to ionizing radiation. Fault tolerance for FPGAs means a consideration of multiple logical hardware layers. It has to start with the coverage of static LUT and routing content via the so called "Scrubbing" method, provided exclusively by Xilinx Virtex FPGAs. Static partial bitstream content is continuously written to the chip via the SelectMAP configuration interface whereas present bit-flips are instantly overwritten at runtime. This feature has been realized using an additional controller connected to flash memory which contains the partial configuration files. It is performed automatically and requires no user interaction at runtime. More complicated is the conservation of dynamic chip content like flip-flop and BRAM data, which is regularly underlying major changes during system runtime. These elements have to be considered at the logical design layer. Well known principles like Double and Triple Modular Redundany are used in conjunction to voters and loopback circuits to avoid accumulation of single bit errors and keep important data valid. Finite state machines for example have to avoid illegal transitions between defined states as well as unknown behavior or reset when entering illegal states. This can be realized by introducing state encoding using a hamming distance of at least 3. The encapsulated integration of fault tolerance to modularized FPGA components enables a selective coverage of design content and thus is totally transparent to connected modules, which may not provide such features.

At the moment we provide two transport solutions (Optics for the final detector setup and Ethernet for laboratory setups) and the readout of two frontend chips (the nXYTER and the GET4). The support for a third frontend chip is planned.

Since there are three slightly different Read-Out Controller boards available (each assembling a different FPGA), we support the firmware for three different target architectures. A fourth target architecture will be supported soon. So today we provide 12, in the future up to 24 different firmwares. Those firmwares can not be maintained separately. We have a Makeflow for the generation of the firmwares used by a nightly builds script. Every night all the bitfiles are build on our development cluster from a clean check-out of the latest revision of the sourcecode from our subversion repository.